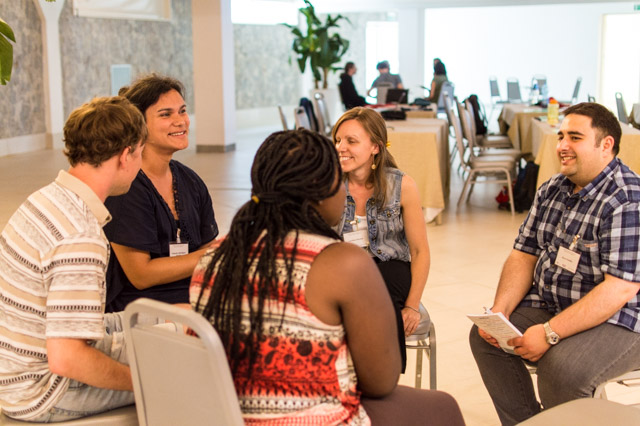 The summer school series follows the idea of a research incubator which brings together experts in computational social sciences (CSS), experts on the research topic in question, and junior researchers to advance future research on the topic by using data-driven modeling approaches. To implement this idea, this year's summer school again applied the successful concept of teaming up junior researchers with senior experts to work through the whole research process on one specific research topic. 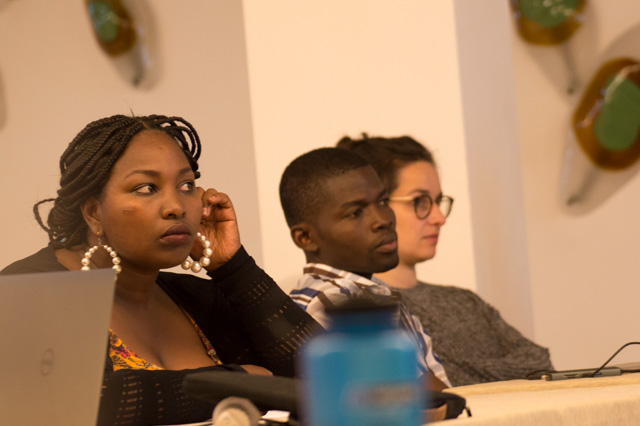 Junior and senior scientists worked together within the following projects: 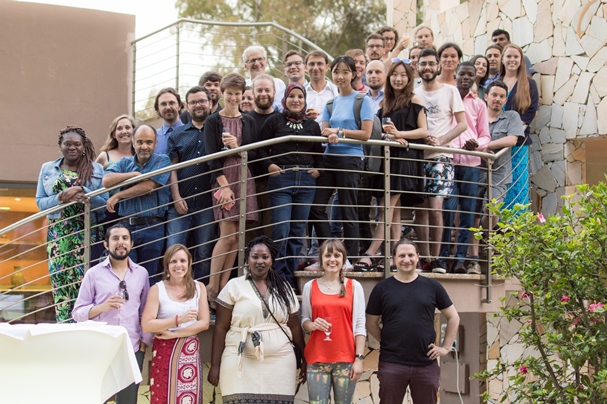 The project work was complemented by plenary lectures on theory, concepts and methods of migration research and computational social sciences methods. Keynote speeches were held by Marta Gonzalez (University of California Berkeley), Dirk Brockmann (Humboldt University Berlin), Emilio Zagheni (Max Planck Institute for Demographic Research), and George Barnett (University of California, Davis). The summer school's program was rounded off with social events such as a guided city tour in Sardinia's capital Cagliari and a Social Dinner. 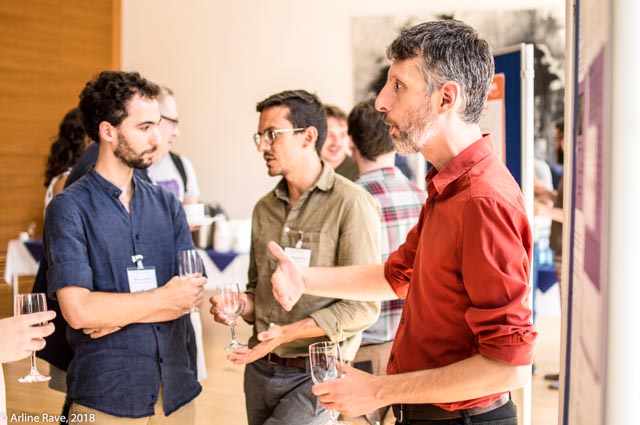 The summer school series follows the idea of a research incubator which brings together experts in computational social sciences (CSS), experts on the research topic in question, and junior researchers to advance future research on the topic by using data-driven modeling approaches. To implement this idea, an innovative concept was developed for the summer school in which junior researchers team up with senior experts to work through the whole research process on one specific research topic. 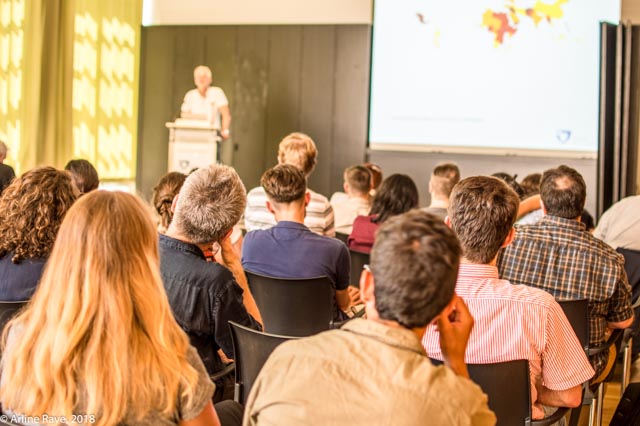 During a project fair at the beginning of the summer school, students had the opportunity to talk to all experts and sign up for one of the eight research projects. For the following two weeks they intensely worked in small groups guided by the respective projects experts on the topic they had signed up for. All project teams continued working on their research after the summer school. Their results will be published in an edited volume.

Junior and senior scientists worked together within the following projects: 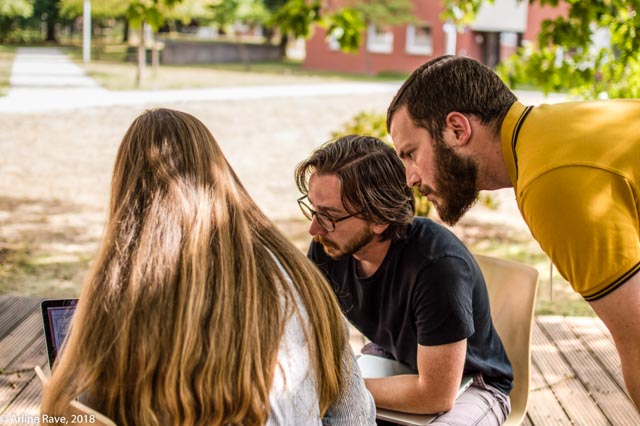 The project work was complemented by plenary lectures on theory, concepts and methods of conflict research and computational social sciences methods as well as an optional pre-summer school workshop on the programming language and statistical software package R. Keynote speeches were held by Kristian Skrede Gleditsch (University of Essex), Nils Weidmann (Univeristy of Konstanz) and Michael Ward (Duke University). Further program components included a panel discussion on the role of gender in academia and computational social sciences. The summer school was accompanied by an interesing social program including a guided city tour, BBQs, a visit of the music and cultural festival “Breminale” and a tour through the memorial "Denkort Bunker Valentin" - the second largest above ground bunker in Europe and former submarine factory of the German Nazi regime. 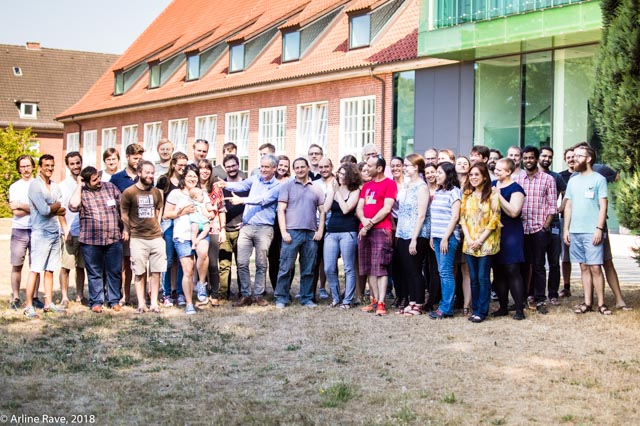 Experts and participants were convinced by the innovative concept of the summer school. Many junior scientists highlighted the summer school's concept of hands-on project work giving them the opportunity to immediately apply what they have learned and to closely work together with some well-known experts. James Kitts, one of the project leaders, admitted that he thought "it was a bit crazy to think that people could really get into a research project in such a short time” but eventually he was amazed by the progress of the projects and said that the summer school was a “fantastic event”. Bruce Edmonds, a project leader too, enjoyed the flexibility of the program giving him the opportunity to learn something from his junior colleagues.

The BIGSSS-LIVES Winter School on "Life Course" took place on March 12-18 at BIGSSS. 19 PhD and Postdoctoral scientists from thirteen countries devoted themselves to current questions in Life Course Research. Methodological, theoretical and empirical considerations were at the center of two workshops organized in cooperation with the Swiss National Center of Competence in Research – LIVES: 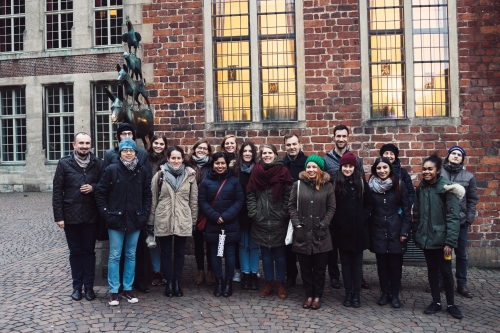 Participants who enjoyed close supervision and worked in small groups also had a chance to present their own research project and receive feedback from the instructors. Leisure activities were also included in the schedule. After a guided tour of the Bremen City, participants got familiar with its neighboring areas and cultural heritage. They learned about the history of migration in Germany in Deutsche Auswandererhaus and had a walking tour of Worpswede and its numerous art museums. In the evening they had a special dinner in Café Worpswede with a surprise three meal course. 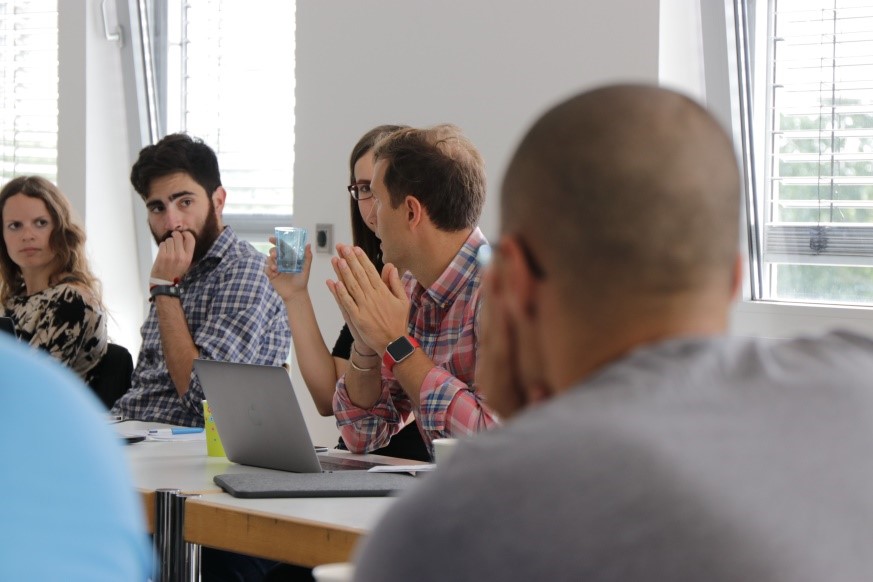 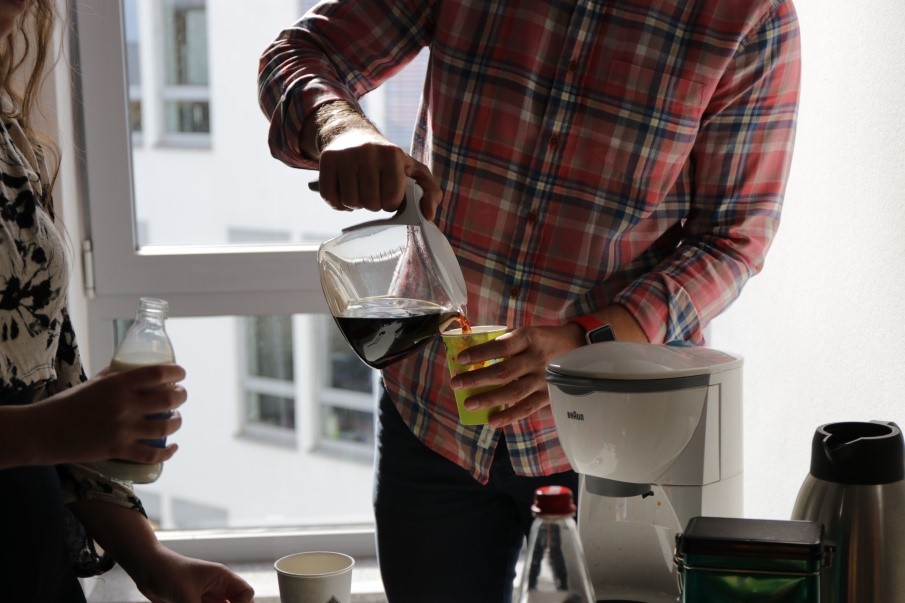 On one morning we had a panel discussion with three interest group representatives working – or having worked for groups active in different sectors. Dr. Marzena Kloka-Kohnen shared her experience as employee of the German steel industry federation, while Stefan Oeltjenbruns shared his insights as vice-chairman of the Airbus works council and active member of the German metal workers union (IG Metall). Agnes Tkotz provided us with insights from the work of the internationally active public interest group Human Rights Watch. On the afternoon of that same day we had a tour of Bremen’s historic center and the historic town hall and used the time at a local bowling center to relax and chat. 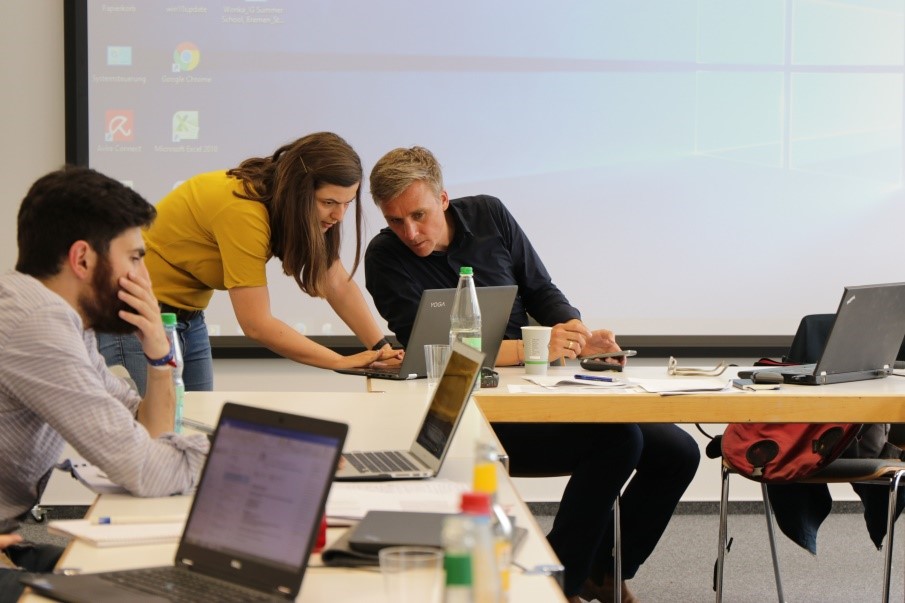 Based on the feedback we received from the participants also during the social dinner during the penultimate evening of the event, the summer school was a great success. The BIGSSS provided an excellent infrastructure (and experience from previous summer schools), the academic program was very well received and so were the individual lectures as well as the feedback sessions on participants’ research and research proposals. 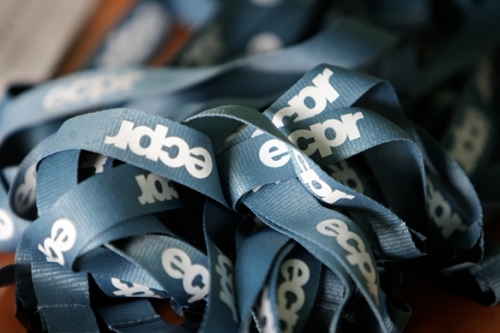 Social Cohesion in a World of Increasing Diversity 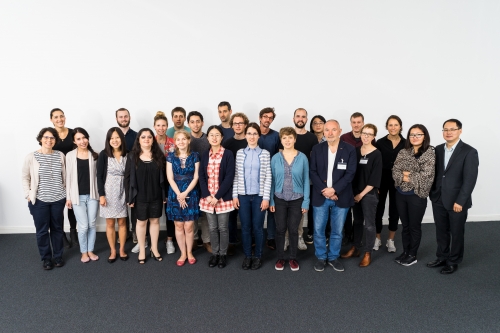 From June 25 until July 1, 2017 17 Master and PhD students from all over the world took part in a joint summer school on “Social Cohesion in a World of Increasing Diversity” organized by BIGSSS and Bertelsmann Stiftung.

The focus of this year’s summer school was on the interplay between social cohesion and cultural, ethnic, and religious plurality in times of societal transformations and increasing migration flows around the globe. 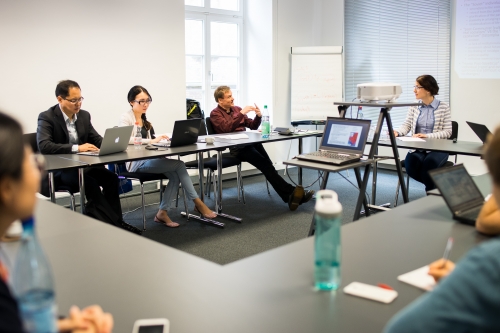 During the seven days of the summer school, participants had the opportunity to assess and discuss the impact of socio-structural, institutional, political as well as individual factors on social cohesion at different levels of societal organization. The summer school was structured around (1) presentations and discussions of participants’ own research projects and (2) presentations by guest lectures. In addition to our BIGSSS faculty members, international scholars were invited to participate in the program: Prof. Dr. Claire Wallace (University of Aberdeen), Dr. Germ Janmaat (University College London), Dr. Damir Esenaliev (SIPRI), Prof. Dr. Peter Schmidt (Justus-Liebig-Universität Gießen) and Prof. Dr. Jan Delhey (Otto-von-Guericke-Universität Magdeburg). This allowed participants to experience a stimulating scientific environment that offered them the opportunity to actively engage in discussions with a multidisciplinary international and Bremen faculty as well as other MA and PhD students working on similar issues. 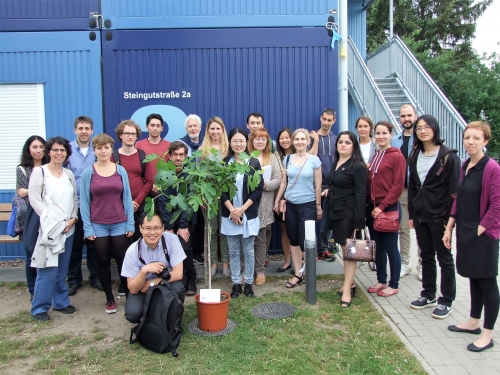 In addition to the academic part, two field trips were part of the program to get a hands-on experience of the topic. The first excursion was to a refugee camp in Bremen-Schönebeck. The second excursion was a neighborhood tour through Bremen Gröpelingen.

Watch the BIGSSS-Bertelsmann Summer School film on Social Cohesion in a World of Increasing Diversity on Youtube!

Intergroup Conflict and Its Resolution - the Case of Ukraine 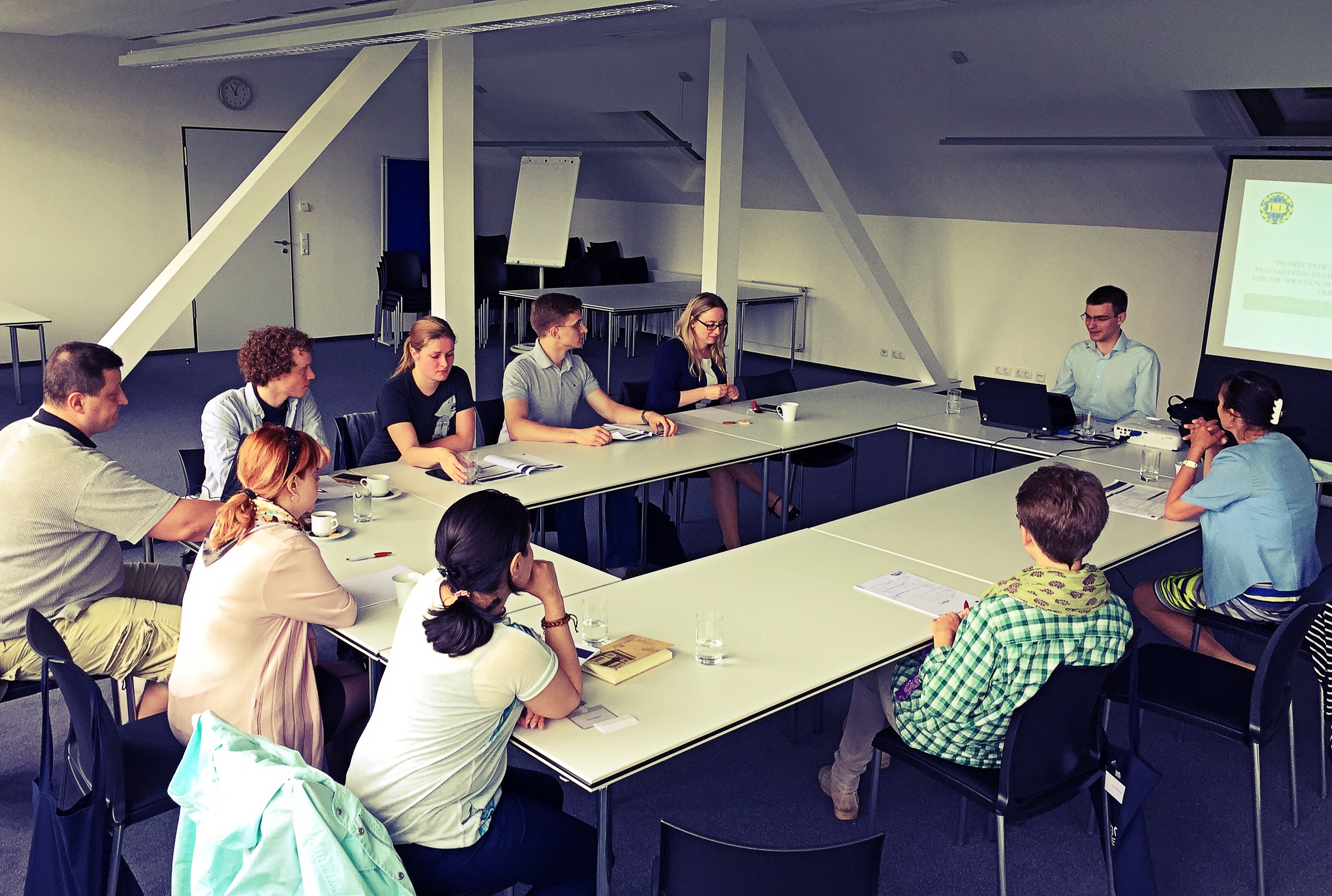 From June 27th until July 2nd, BIGSSS hosted this year's Summer School on "Intergoup Conflict and Its Resolution - The Case of Ukraine" at Constructor University Campus.

During the six-day Summer School program, 20 young social science scholars from Armenia, Azerbaijan, Georgia, Moldova, Poland, Turkey and Ukraine had the chance to meet face-to-face, to network, and to participate in academic exchange on their research projects under the guidance of our experienced Summer School faculty and external experts. 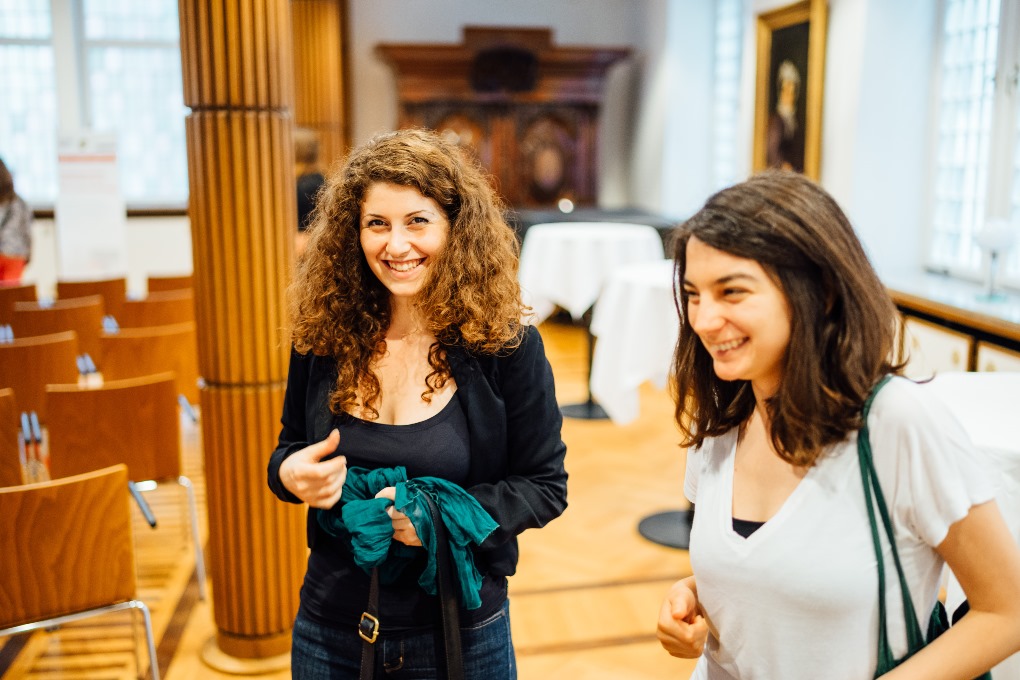 As in previous years, the summer school program was structured around the core elements of (1) presentations by guest lecturers followed by discussions and (2) presentations and discussion of participants‘ own projects. Participants benefited from exceptional academic conditions: they enjoyed a rare multidisciplinary get-together of political scientists, sociologists, and historians with psychologists who work on intergroup conflict and are typically not part of the academic discourse on the violence in the Donbas region. The Summer School thus aimed at generating a better understanding of the Ukrainian conflict as well as Ukrainian society and politics at large, and at deepening the participants' insight into the complexity of intergroup conflicts and their resolution. 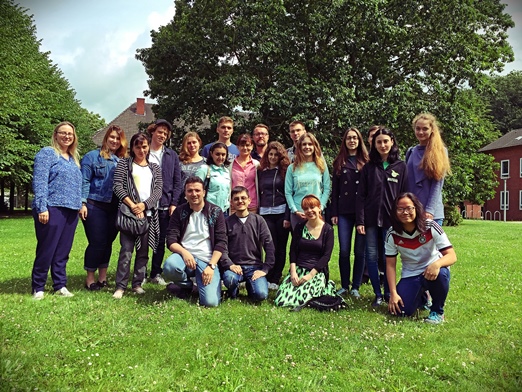 The Welfare State and Inequality 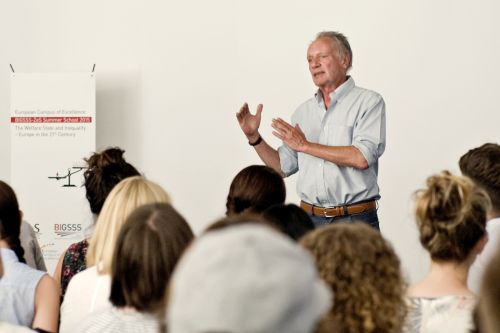 In 2015, BIGSSS and ZeS hosted the Summer School on "The Welfare State and Inequality – Europe in the 21st Century". The summer school was part of the European Campus of Excellence program. It was co-funded by the Volkswagen Foundation, the German Academic Exchange Service (DAAD) and the Mercator Foundation. The aim of the ECE Summer School was to support young social scientists by opening a cross-border dialogue on current theoretical questions and methodological approaches to questions of inequality in European welfare states in the 21st century. 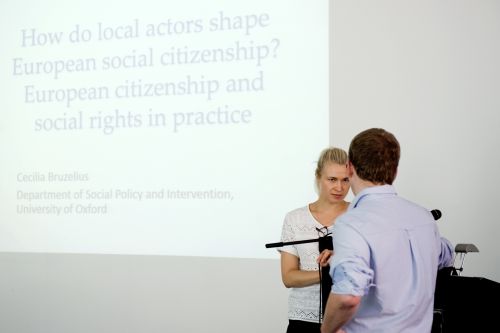 In the course of the 20th century the welfare state became a crucial structural feature for Europe’s modern democratic societies. Its social policies not only cushioned, compensated, and counteracted all kinds of social risks but also advanced societal integration and provided for people’s participation to a degree hitherto unknown. Yet, this welfare state expansion rested upon economic, social, and political conditions which have profoundly changed over the last decades. Three aspects, in particular, are of utmost importance for successfully dealing with these welfare state challenges and thus constituted the core topics of the ECE summer school 2015: 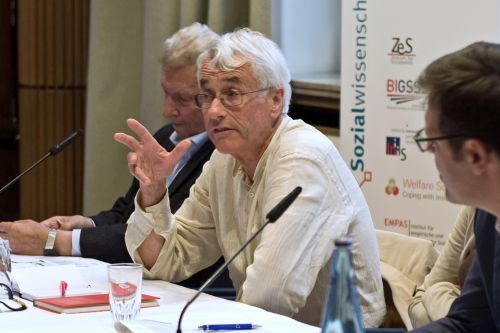 During the 10 days of the summer school program, an international and academically excellent group of 30 advanced M.A. and Ph.D. students (from the USA, South Korea, Chile, Switzerland, Portugal, Italy, Germany, Austria, Finland, Greece, Sweden, Belgium and the Netherlands) with a social science background discussed these issues with renowned scholars of the field. As in 2014, the summer school program was structured around three core elements: (1) presentations by guest lecturers, (2) discussions of selected key readings with the guest lecturers, (3) presentations and discussion of participants‘ own projects. Participants benefited from exceptional academic conditions: they enjoyed the stimulating environment of a multidisciplinary and international community of first rate scholars in the close environment of a graduate school. Besides discussing their own research projects they got in contact and networked with an outstanding faculty and met an international body of bright M.A. and Ph.D. students working in similar research fields. 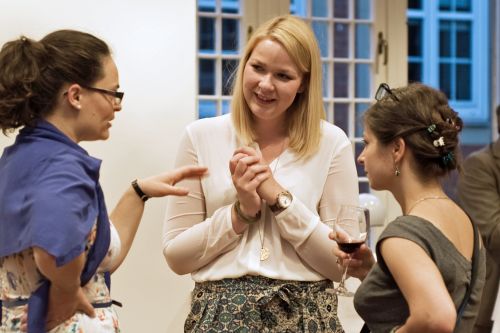 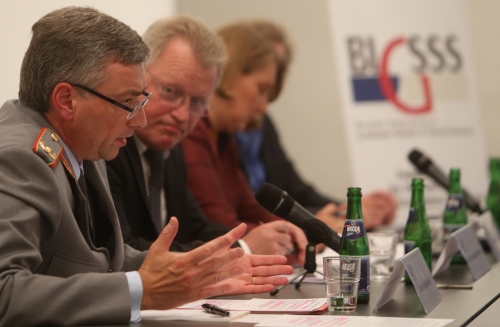 The first BIGSSS summer school on "Interventions" was an occasion for 18 advanced M.A. students and Ph.D. candidates from international universities to intensely discuss their work on interventions with a group of international scholars:

Since the 1990s the theory and the practice of intervention have become some of the most heatedly debated topics (not only) in the field of International Relations. The term ‘intervention’ was understood in its broadest sense and also addressed projects in the neighboring fields of development policy and social policy. Applicants of the major disciplines of the Social Sciences were asked to relate their projects to the following three sections: