BIGSSS Symposium at the Regional IACCP in Warsaw, Poland › view all 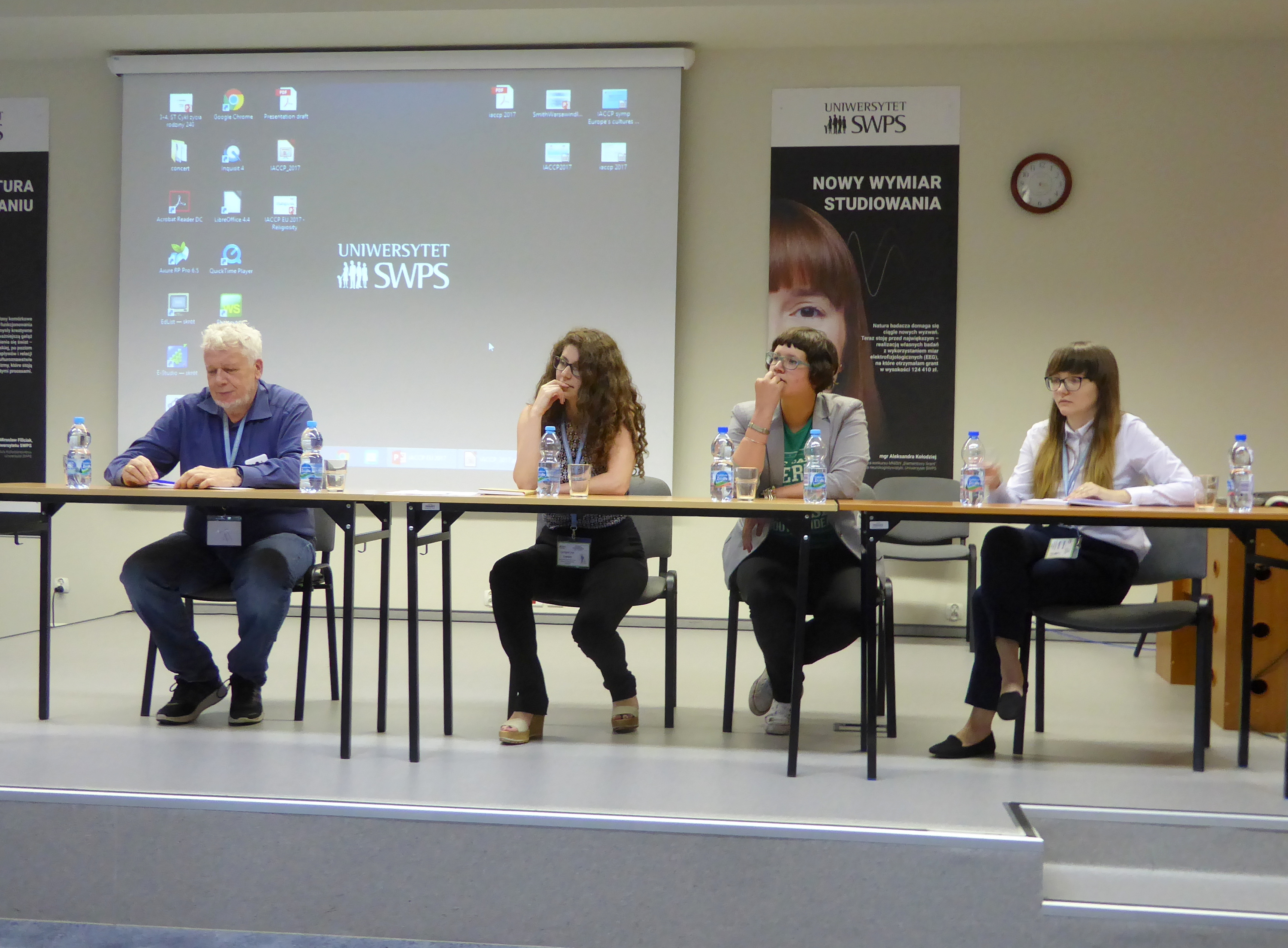 From the 16th to the 20th of July 2017, the International Association for Cross-Cultural Psychology (IACCP) held their 9th regional conference in Warsaw, Poland. Boasting a colourful array of topics and approaches, the conference was attended by scholars from numerous European universities, as well as a few, dedicated attendants from distant Asian, American and Australian ones. The conference was dedicated to Professor Cigdem Kagitcibasi, an active IACCP member who had recently passed away in her homeland of Turkey, and sought to showcase work by academics from all stages of their careers.

Thus, it was the perfect opportunity for BIGSSS fellows to elaborate on some of the projects they have worked on, in a symposium on the impact of religiosity in modern society. This controversial topic seemed to have been a lure, for the symposium was very well attended. Chaired by Dora Simunovic and Malgorzata Jakubowska, the only other speaker was Lucy Grigoryan, while Klaus Boehnke graciously agreed to step in as discussant at the last minute. Despite this small ensemble, the symposium was well received and, as expected, incited much interest, debate and fruitful discussion.

After a short introduction, Dora Simunovic gave the first talk, which was meant to provide a general theoretical outlook on religion and set up the two talks to follow. While the IACCP is primarily interested in the psychological artefacts of culture, religion, she contended, is best understood from an evolutionary perspective. It is a social mechanism meant to solve the dilemmas of communal living, problems of morality, and the rule of law by “outsourcing” it to a higher power. Thus, religion as a social phenomenon promoting the belief in a supernatural, divine monitor is, in effect, an adaptive cultural product, which originated all over the world, and which is based in some basic characteristics of human psychology. The problems with religion, however, arise from the fact it is becoming obsolete, and even detrimental to some human activities, like living in heterogeneous societies, accepting scientific truths, and even thinking in the long term.

Malgorzata Jakubowska continued the topic of the troubled position religion in modern society by presenting her doctoral project designed to unravel the social cleavage opening between theists and atheists. In essence, she argued, religious extremists have monopolized morality for religion, saying that it can only be understood as “the will of god”. Thus a secular morality is denigrated and distrusted by religious communities worldwide, as are atheists. In fact, atheists have been the least trusted group of people in the United States for some years now, a country boasting a large population of fundamentalist Christians. They scored below drug dealers and rapists. Malgorzata presented preliminary data demonstrating that this discrimination by theists against atheists is the result of the theists’ inability to accept people can behave morally without divine leadership.

Finally, Lucy Grigoryan drove the point home. She presented data from her doctoral project on intergroup relations in which she looks at how multiple cross-cutting social categories (e.g. gender, ethnicity, religion, education levels, etc.) influence attitudes about the people who belong to those groups. Her hypothesis, derived from well-established theories of social psychology, suggests the moderating factor is similarity – the closer one group resembles the individual’s idea about themselves, the more likely they are to hold positive attitudes about it. Indeed, this hypothesis panned out in all cases except religion! This demonstrates once more that religion is peculiar as a social category, and unfortunately, does much to separate us from each other rather than bring us closer together.

While the conclusions that could be drawn from their presentations were limited and not particularly optimistic, it was obvious to everybody in the room that confronting such issues is paramount to the future of our societies. This, at least, could be judged from the number of questions – ranging from methodological and conceptual, to private and practical. In his own words, this left Klaus Boehnke with little to do other than underlie the points BIGSSS fellows have made: religion is a social phenomenon of great complexity and impact on human societies. While in the majority of cases, it is neither harmful nor vexing, in some other cases, it becomes a destructive force, promoting distrust, discrimination, and even war. What will its future be, and how can we help navigate it? Hopefully, this important debate will be continued in Guelph, in 2018, where the next IACCP will be held.