A Theory of Civilian Noncooperation with Armed Groups: Civilian Agency and Self-Protection in the Colombian Civil War 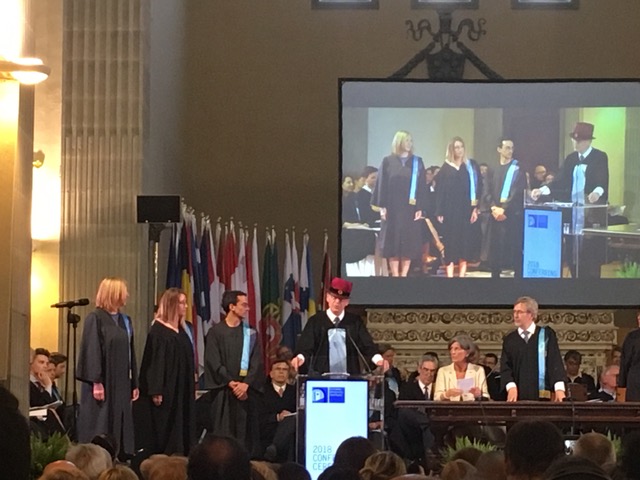 Juan Masullo J., Postdoctoral Researcher at the BIGSSS Methods Center, has been awarded with the Linz-Rokkan Prize for his dissertation, “A Theory of Civilian Noncooperation with Armed Groups: Civilian Agency and Self-Protection in the Colombian Civil War”. The prize was presented at the Degree Conferring Ceremony of the European University Institute (EUI) in Florence on June 15th, 2018.

This study deals with the collective roles that civilians come to play in the context of civil war. Concretely, it documents and analyzes a little studied pattern of civilian agency: civilian noncooperation with armed groups. It develops a theory that specifies where and when civilians are more likely to organize themselves to refuse non-violently to cooperate with armed organizations. Where territorial control is shifting, where violence against civilians has recently spiked, and where targeting is perceived as unavoidable, a desire for noncooperation is likely to evolve. However, this desire is not enough for us to observe organized noncooperation. Campaigns of noncooperation are likely to emerge when desire meets capacity for collective action. Localities with a prior history of mobilization and/or with the support of external actors are more likely to count on the leadership and the associational space needed for organizing action. These conditions are found to be individually necessary and jointly sufficient across three different ideal types of noncooperation: oblique, pacted and unilateral. Complementing this set of expectations, the study specifies a limited number of cognitive and relational mechanisms that explain the pathway towards noncooperation. Civilian noncooperation is proposed both as a strategy of community self-protection and a form of contentious politics. In this sense, the study bridges scholarship on the micro-dynamics of civil war, civil resistance, social movements/collective action and civilian protection. The analysis is embedded in a three-stage research design that combines within-case analysis, cross-case structured and focused comparisons, and paired comparisons of positive and control observations. The empirical data, both qualitative and quantitative, was gathered during two separate waves of field research in warzones using different techniques of data collection. These included over 150 individual and group interviews with civilians and (ex)combatants, memory workshops, collective map-drawing and timeline-building exercises, and direct observation. The goal of this study is accomplished to the extent that it succeeds in the art of combining parsimonious theorization of an outcome with the smells and sounds of the complex processes that give life to that outcome. In other words, providing sensitive simplification and empirically falsifiable claims is as important as offering a realistic and fair account of the lives of the communities I lived and worked with over the past years. Ultimately, it is for the reader to judge.