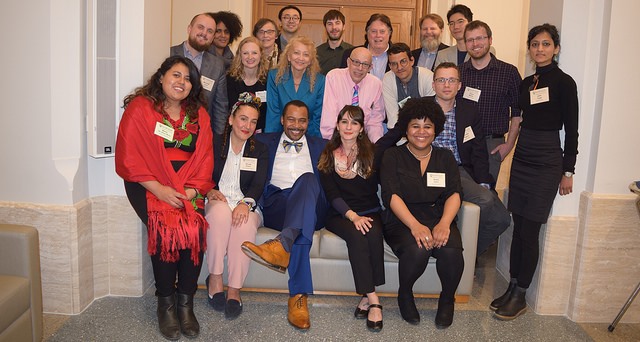 BIGSSS Methods Center Postdoc Juan Masullo was selected as part of the "2018 Young Scholars in Social Movements” by the Center for the Study of Social Movements at the University of Notre Dame in recognition of his doctoral dissertation. He was invited last month to Notre Dame to present and discuss his work among the other Young Scholars and with the participation of several leading scholars in the field of social movements and collective behavior. The event concluded with an Award Ceremony, where Aldon Morris was awarded with the John D. McCarthy Award for Lifetime Achievement in the Scholarship in Social Movements

Juan presented a paper on the role that ideational factors play in forging civil resistance in the context of civil war. This paper is based on his dissertation research and is part of his current book project "Civilian Agency in Civil War. Refusing to cooperate with armed groups to protect our communities".

For long civil war scholarship largely ignored, or at best downplayed, the role of ideology in shaping both macro processes and micro dynamics of civil conflicts. While in recent years we
have seen a renewed interest in exploring whether and how ideology matters, most of this work, naturally, has focused on how ideology shapes armed groups’ behavior. In this paper I
shift the focus away from armed organizations and argue that ideology is also fundamental to understand the ways in which civilians engage in contentious collective action to respond to armed groups in the localities where these operate. I focus on one particular response, civilian noncooperation — i.e., the refusal to cooperate with each and every armed group present in
their territory – and argue that the form that noncooperation takes is – at least partly – shaped by normative and ideological commitments. These ideational forces push civilians towards
nonviolent forms of noncooperation (as opposed to armed resistance) and incentivize them to engage in more confrontational forms of noncooperation. Relying on original micro-level
data collected in warzones in Colombia, and using the strategy of paired comparisons, I provide detailed evidence for this argument and cast doubt on alternative explanations. I trace
the effect of ideational factors on the repertoire of action in three campaigns that engaged in distinguishable forms of noncooperation and show that the effect is independent and comes from exogenous sources.