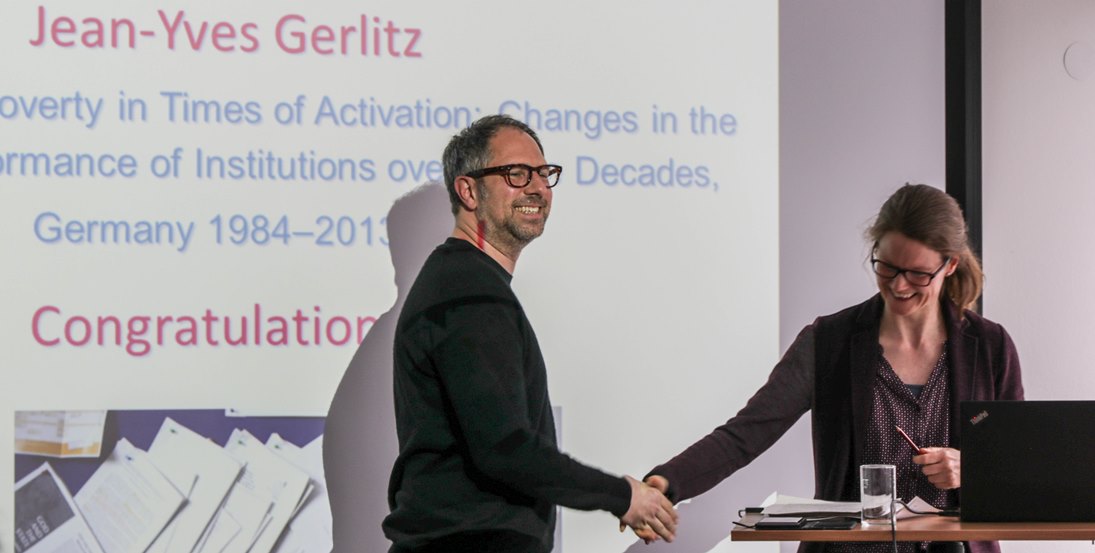 In 2018, BIGSSS for the first time awarded two Best Paper Prizes, endowed with 500,-€ each, for the best single-authored and co-authored paper by a BIGSSS PhD fellow. 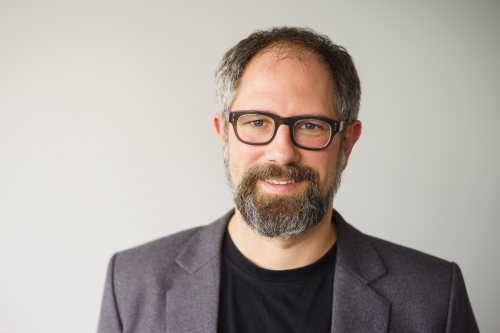 Jean-Yves Gerlitz (Field B) received this year’s Best Single-Authored Paper Award for his paper on "Rising In-work Poverty in Times of Activation: Changes in the Distributive Performance of Institutions over Three Decades, Germany 1984-2013" (for abstract and download, please see below). 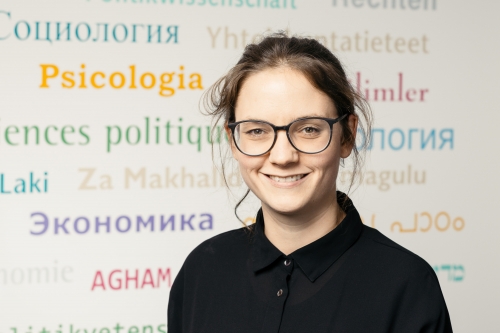 Lara Minkus (Field B) received this year's Best Co-Authored Paper Award for her paper on "Gender Wage Inequalities Between Historical Heritage and Structural Adjustments: A German-German Comparison Over Time" (for abstract, please see below).

The awards were presented at the BIGSSS Meeting of Members on April 25th, 2018 - unfortunately, without Lara Minkus because of a research stay in the US.

The laudations were held by Simone Scherger, honoring the achievements of these excellent pieces of research. The committee was especially impressed with the societal relevance of both papers as well as their analytical clarity and sophistication.

This truly sounds like a great read! Great job, Jean and Lara, and everyone else who submitted their papers. Let’s keep up the good work and we hope to receive even more excellent submissions for the next Best Paper Awards.

In-work poverty contradicts the belief that a job should provide a decent standard of living. Nevertheless, the share of working poor in most European countries has risen. Studies show that the development of in-work poverty is attributable to changes in the distributive performance of the labour market, households and the welfare state, as measured by their ability to prevent people from falling below the poverty line. However, such studies have been limited to standard employment and did not address activation, i.e., welfare state transformation through deregulation, recommodification, and social investment. Taking the case of Germany, I analyse changes in the distributive performance of institutions within the context of activation policies (Hartz reforms) for employees that differ in work duration and intensity. Based on descriptive trend analysis of data from the German Socio-Economic Panel, I retrace the process of income distribution and look at how institutional changes have contributed to the development of in-work poverty. I find that an increase of in-work poverty can be attributed to a decrease of the distributive performance of the labour market after the implementation of the Hartz reforms; that individuals in non-standard employment were more affected than people in standard-employment, and that increases in the performance of households and the welfare state do not absorb this development. Activation has shifted responsibility from the labour market to the other distributive institutions.

While research on the gender gap (GPG) is growing, there has been no systematic attempt to examine the stability or adaptation of GPGs in light of sudden historical changes. We fill this gap by exploiting German reunification, after which western male-breadwinner policies were abruptly superimposed on the hitherto gender-egalitarian East. Using decompositions on the Socio-economic Panel, we can thus examine how historically grown gender arrangements influence the GPG in Germany between 1990 and 2013. We find support for the concept of a stalled gender revolution and a continued influence of pre-unification gender arrangements on the German GPG.